Community leaders and animal welfare advocates Susie Hitchcock-Hall, LuAnn Morgan, and Paul O’Neill decided to step in and do something about it.

They set out with a clear and simple mission: to save as many cats and dogs as they can.

Together, they founded Midland Humane Coalition (MHC) with a mission to rescue healthy, adoptable pets from the Midland Animal Services euthanasia list and find them permanent homes.

​A brief history of MHC
As told by LuAnn Morgan, Founder and Board Member
Spring 2010 – Susie Hitchcock-Hall, Susie’s South Forty Confections, LuAnn Morgan, former city council member, and Paul O’Neill, Midland Animal Shelter Director, invited all animal rescues to meet at the candy kitchen to discuss what we could do about the overwhelming pet population in Midland County.

Susie lives in the County where record numbers of pets were being abandoned. Within the city limits, pets were roaming loose in the streets, attacking citizens. Midlanders were moving, abandoning pets, and the euthanasia rate at the shelter was at an all-time high.

Midland Animal Shelter (MAS) was constructed early 1970 and Midland’s population had doubled.  MAS had always been a low priority for the City.  Thus, there were numerous rescues in Midland, but they were highly competitive and in no way partnered nor communicated with other rescues.  We decided we needed a collaborative effort to combat our high euthanasia rate.

As a result, all local rescues met to work together to work towards a common goal – reduce the euthanasia rate in Midland County.  To be more specific, we wanted to control the pet population, find homes for pets, and to keep our pets healthy.

MHC is conceptualized
We agreed on the name of Midland Humane Coalition (MHC) – as an umbrella organization for all rescues.  We recognized that each rescue has an individual mission, from no kill, to transport, to adoption, and each continued to operate as independent 501.c.3 organizations, but MHC would be the “Hub” that supports all rescues.

June 2010 - MHC learned that PetSmart Charities was offering a grant to convert their former Banfield veterinarian clinics into a “Enhanced Adoption Center” (EAC) to non-profits (modeled after the facility created by Bill Boecker, Bass Brothers, Fort Worth, TX. Read about it here). ​ 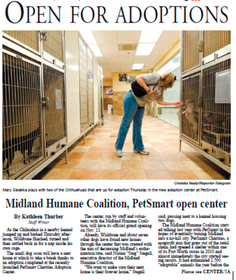 Becoming a non-profit
We had to quickly file and received our non-profit status and applied for the PetSmart grant.  To ensure that we made an impression, Susie and LuAnn flew to Phoenix, AZ and met with PetSmart Charities.  While on the plane, LuAnn mentioned to Susie that we probably should have a business plan and prepared the plan on the plane.  That night, we printed the plan on the hotel copier and got it bound at Office Depot on the way to PetSmart Corp the next morning.  They were impressed with our presentation and made Midland, TX the first in the nation to be awarded the Enhanced Adoption Center grant modeled after Fort Worth, TX. (LuAnn thinks it was Susie’s candy that won them over).

​As soon as we got back to Midland, Susie immediately called Mr. Boecker at home and arranged for us to meet with him so we could successfully establish our EAC in Midland. The next day, we were on our way to Bass Towers to meet Mr. Boecker and take a tour of the EAC in Fort Worth!

The concept of the EAC is a partnership between PetSmart, the City of Midland, and a non-profit, Midland Humane Coalition,  to place City Shelter pets for adoption at PetSmart EAC.